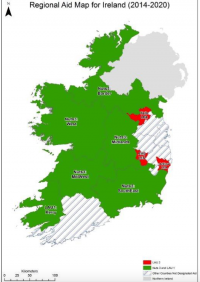 In September 2018, NBC Universal began a lobbying campaign in Ireland for government to introduce a 5% Regional Uplift to the existing Section 481 production tax incentive (worth 32% across the entire Republic of Ireland.)

This was to assist with defraying the expense of training up a local pool of experienced crew outside the traditional Dublin/Wicklow hub of the Irish industry. According to NBC, the proposed “Regional Uplift” was based on the model used to help production move out of New York City to upstate Buffalo and worked well.

Cork’s Local Authorities as well as Film In Cork were happy to add our voices to others around the country calling for this measure as it would add to the attraction of filming in Cork.

What is the Uplift?

It is a tapered support on top of the existing 32%, available for four years at the following rates:

As this measure constitutes enhanced State Aid it required European Commission approval, which was given on July 17th, 2019.

In an effort to ensure EU approval, the Government selected a mechanism known as RAGS (Regional Aid Guidelines – please see below Map indicating qualifying regions of Ireland & information note on RAGS) to roll out the measure.

These guidelines were negotiated at EU level and the current version covers July 1st, 2014 – December 31st, 2020.

A complex formula involving foreign direct investment (FDI) rates of attraction & retention, unemployment density rates, etc, are involved in deciding what areas of the country qualify for enhanced State Aid. It covers all industries and sectors and is not specific to film or television production.

Most of Ireland qualifies under these guidelines except for Dublin and certain surrounding areas (including parts of Counties Wicklow, Kildare, Meath & Louth) as well as all of Cork City & County.

Some islands off the coast of Counties Cork & Dublin do qualify (see Appendix 2 RAGS Info Note below for list of qualifying islands.) 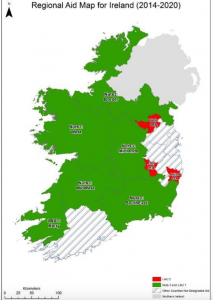 What is the problem for Cork?

The growing Cork production industry will be at a major disadvantage nationally for the four year period of this Regional Uplift, and this in spite of the Government’s National Planning Framework (NPF) stating that it is an investment priority to help grow Cork into a true second city to counterbalance the overdevelopment of the Dublin region.

Significant steps have been taken already in this regard, including the major expansion of the City’s boundaries on May 31st, 2019 bringing the population up to well over 200,000 people.

Cork has been home to numerous high profile feature films & television series over the years with everything from The Wind That Shakes The Barley to Star Wars VIII shooting in Cork, along with the success of homegrown talents such as Peter Foott’s The Young Offenders (Seasons 2&3 currently shooting in the City) and Carmel Winter’s recent hit feature film Float Like A Butterfly which shot on location in West Cork.

Whilst Cork lacks infrastructure in terms of studios, there is a pool of experienced crew as well as very talented local filmmakers who will be placed at a distinct disadvantage by this measure for the next four years.

Film In Cork is calling on the Government to put in place a remedy that will allow the local, national & international production communities to still shoot in Cork over the period this measure covers.

In recent years, we have had direct experience of offering Irish-European co-productions 1% of their production budgets and have successfully enticed them to shoot their entire project in the Cork area.

5% (even 2% in Year 4) will mean that Cork is at a huge disadvantage nationally and will struggle to support any regional production, with the resulting loss of local economic stimulus, employment, and capacity building through placement of trainees & graduates.

We are calling on the Minister for Arts, Heritage & Gaeltacht to act and support Cork’s creative sector and provide a Regional Support Fund for Cork to offset the major disadvantage the region will face over the coming four years.

LINK to the Regional Aid Guidelines information note on the Department of Business, Enterprise & Innovation website.