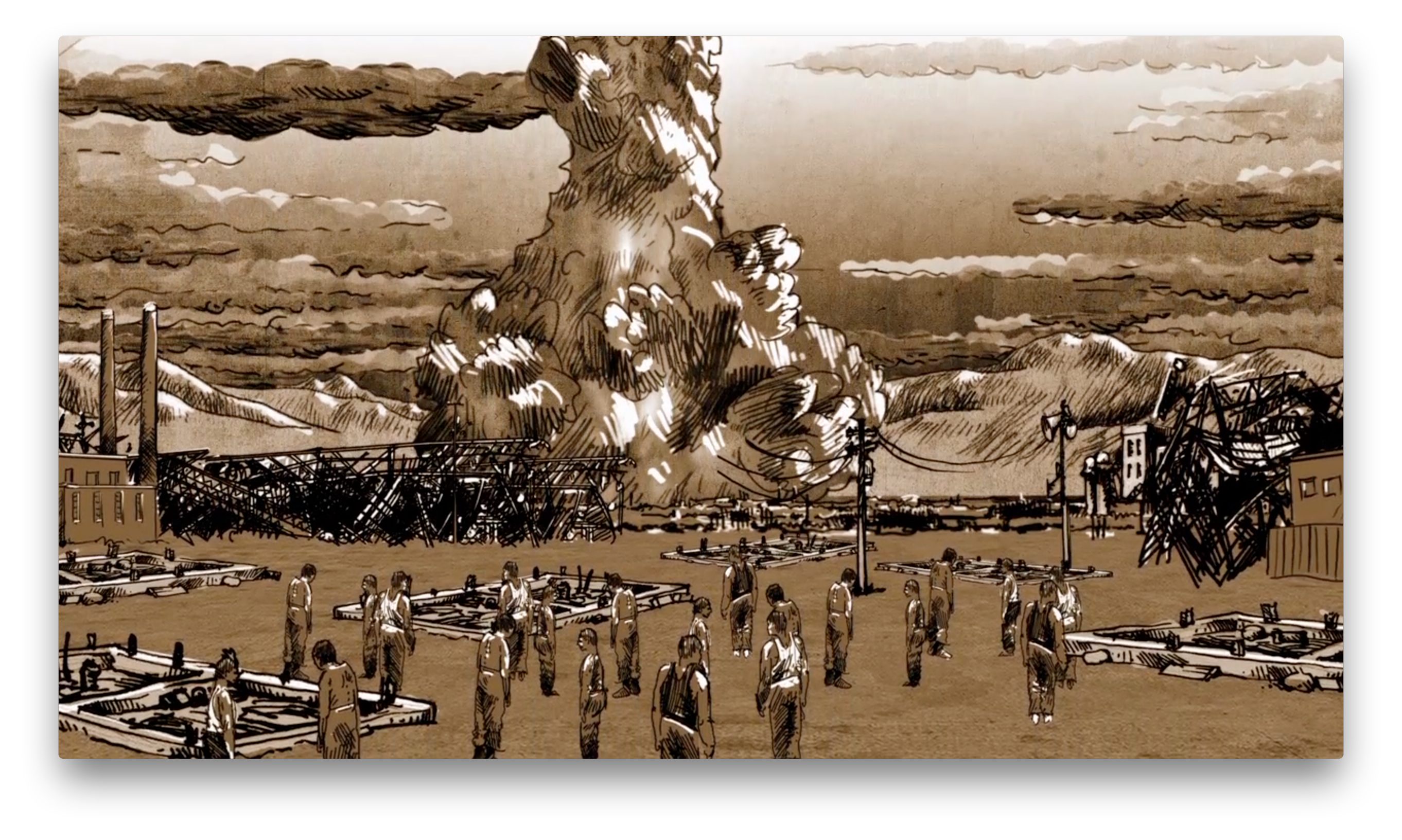 Film In Cork sat down recently with Bob Jackson, producer of the extraordinary documentary “A Doctor’s Sword”, to get the behind-the-scenes story of how the film came to be. As with many documentary projects, it had both a long gestation and took a lot of patience and determination to see it the whole way through. 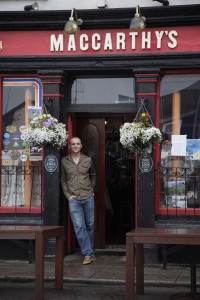 I asked the woman behind the counter if I was in the right place, she pointed to a framed newspaper article on the wall and replied “that was my father”. This was my first introduction to Adrienne MacCarthy, of the renowned MacCarthy’s bar in Castletownbere, West Cork. I read the article about her father’s experiences during the war and by the time I finished reading Adrienne had gone upstairs, returned and placed the Samurai sword on the bar counter.

I was amazed as she explained that in the handle of the sword were the ashes of the ancestors of the officer who had given her father the sword after the Japanese surrendered. The incredible craftsmanship of the blade is obvious – it’s still dangerously sharp and allegedly was still radioactive from the atomic bomb (when I tested it some time later with a Geiger counter this turned out not to be the case, Adrienne and Nicola’s pet pugs were more radioactive than the sword!)

Adrienne told me the details of her father’s story and I later borrowed Aidan MacCarthy’s autobiography ‘A Doctor’s War’ from Cork City Library to get more info. What struck me when reading his biography was that Aidan MacCarthy often describes in one paragraph what someone else would base an entire book or life story on. He casually describes one near-death experience after another, how he survived 3 nights being bombed and machine gunned by the Luftwaffe on the beaches of Dunkirk, saved RAF crewmen from a burning plane that had crashed into a bomb dump, endured almost 4 years as a Japanese POW, was almost killed by an American submarine which sank the transport ship bringing him to Japan and how finally he survived the atomic bomb dropped on Nagasaki in August 1945 where he was being held in a POW camp.

It only recently became clear to me that the factory complex where he was imprisoned was the target of atomic bomb! I told this story to anyone who would listen for ten years and it always received the same reaction – how come people don’t know about this? The thing that struck me was that years after hearing it, people always remembered the details of the story. One of the most interesting things about it for me has always been that somewhere in Japan there’s a family who’s father or grandfather gave Aidan MacCarthy their sword. Why did he do it? Where is that family now and would they like to reconnect with their ancestral sword? 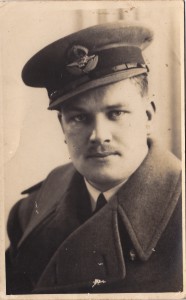 In 2010 Gary Lennon (director) and I began making this documentary by interviewing Dr MacCarthy’s daughters Adrienne and Nicola and his wife Kathleen (she sadly passed way in April 2013). Over several years we gathered more and more information about Dr MacCarthy’s story by developing contacts with the Japanese POW Research Organization, various other POW researchers and research organizations around the world. We also relied on NGO’s and government institutions in Ireland, the UK, the US, Australia and Japan in order to piece together the details of Dr MacCarthy’s experiences in order to find the identity of the Japanese officer who gave Dr MacCathy his sword.

As we gathered these sources together a clearer picture emerged of the incredible person Aidan MacCarthy was and the odds he overcame to not only survive his ordeal but lead a normal life after the war. His daughter Nicola has told us that he incredibly held no bitterness toward the Japanese (although he wouldn’t allow a Mitsubishi car in the driveway!)

When we first interviewed the family, Kathleen (93 at the time) told us that Aidan was given a photo of the Japanese officer who gave him the sword and that the photo was somewhere in their possession. This was something we pursued for several years because if we could find the photo then we could identify the person who had given Dr MacCarthy the sword, find his family in Japan and allow them to reconnect with the sword.

We pestered Nicola for three years, calling every few weeks or months to give them an update on how the project was going and always asked was there any sign of the photo. As an RAF family, the MacCarthy’s had moved house seventeen times so in Nicola’s house in Castletownbere there were countless boxes and cases of papers, documents, photos and old bills, even the receipt and menus for Aidan and Kathleen’s wedding in 1948. Finding a photograph of a Japanese officer who gave their father a sword in Nagasaki almost 70 years previously was like finding a needle in a stack of needles.

We made arrangements to travel to Japan in August 2013 with Nicola MacCarthy, more in hope than expectation of finding any descendants of the man who gave her father the sword.

We realized our luck had changed when on the morning of 18th of July 2013 I got an emotional call from Nicola MacCarthy to say that she had found the photo of the Japanese officer along with a huge collection of other documents, photos from the camps, old newspaper clippings – her father had kept these hidden and she had never seen any of these before. I got in the car and drove straight to Castletownbere and there it was, a photo of a very austere-looking Japanese officer holding the same sword that hangs on the wall in MacCarthy’s bar in Castletownbere.

On the reverse side of the photo was an inscription in Japanese. I took a photo and sent it to our translator in Japan. Allowing for time differences I had to wait until the following morning to get the translation. I nearly fell off the chair when I read the translation of what was hand written on the back of the photo:
“To my dear friend Dr MacCarthy, this is with my parting gift to you on this day the arrival of the peace, August 1945. Kusuno” 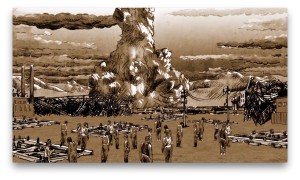 This was the piece we had been searching for years to find, it proved that the sword was given as a gift and wasn’t taken or surrendered. This is a hugely significant fact particularly for the Japanese and it also meant that we could possibly find the Kusuno family, if they still existed.

The inscription was also a huge breakthrough because with it we could check all of the American military records for the commanding officers of the POW camps in Kyushu province. These records show that 2nd Lieutenant Isao Kusuno was the camp commandant of Camp 26 at Keisen from May to September 1945.

The original typed orders written by Aidan MacCarthy when he took over the camp confirm that he was at Camp 26 (Keisen) on September 3rd 1945. So when we had this information we knew for certain that we were looking for any surviving descendants of Isao Kusuno.

All of this happened very quickly because we were flying to Nagasaki on the 7th of August 2013, initially more in hope than expectation but with the photo and the family name ‘Kusuno’ we were able to get press and local TV coverage in Japan to help us with the search. Two newspapers picked up the story (the Asashi Shimbun and the Nishi Nippon), these have over 13 million readers combined. We arrived in Nagasaki on the 8th of August and the articles were printed on the 9th, the anniversary of the dropping of the bomb. 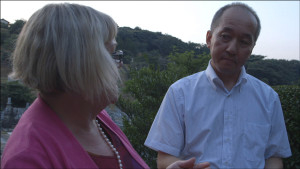 We brought Niki to the site of the POW camp in the centre of Nagasaki, 68 years to the day and hour since her father survived the atomic bomb, less than a mile from the epicentre of the blast. It was an unnerving experience because the area would have looked almost exactly as it had when the bomb was dropped, with the same heat and humidity as the day we were there.

The following day we were filming at the site of the POW camp at Keisen, about 4 hours drive from Nagasaki. We got a call from a man who said he was Isao Kusuno’s grandson, he said he wanted to meet Niki and we arranged to meet at Isao Kusuno’s grave as it was about half way between us. We asked him to bring photos of his grandfather so we could be absolutely sure it was him.

It was a very moving experience to see both families meeting almost 70 years after Aidan MacCarthy saved Isao Kusuno from a POW who wanted to kill him in revenge for their treatment during the war. His grandson Satoshi Kusuno mentioned to Niki that had it not been for her father he wouldn’t be here to meet us: the photos that he brought with him show him growing older and raising a family after the war.

“A Doctor’s Sword” is in various cinemas nationwide and opens in Triskel Christchurch on Sunday August 16th. 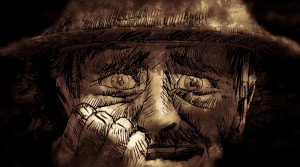