If you, your friends, school, college, youth club or project, have made a short film in any of the above categories and would like to see it on the big screen, then get in contact. All you need to do is fill in an entry form and send it in to us with a copy of your film. To download an entry form click on this link: Entry Form.

The festival will take place in Youghal, Co. Cork, Ireland April 21-23 and offers an exciting opportunity for young filmmakers, aged 12- 24 years, to gather together in a vibrant festival atmosphere for a rare chance to network and showcase their work. We accept films that are shorter than 15 minutes in length.

To Enter: submit your film on line using We Transfer with your completed Entry Form to Cork Film Centre, info@corkfilmcentre.com, before February 12th and you could see your film included in the 2016 Festival programme. Please fill in the Entry Form carefully and also cc your e mail tofirstcutfilm@gmail.com.

YOU WILL RECEIVE AN EMAIL TO ACKNOWLEDGE YOUR SUBMISSION/Entry Form. If you do not receive an email, the team did not receive your submission.

As well as the screenings of works by young filmmakers, the Festival will also include workshops, performances and the rare opportunity for young filmmakers to learn from, and engage with the professionals. Panel discussions, Q&A sessions and hands-on workshops will take place in the Mall Arts Centre and in a variety of other locations throughout the town during the Festival. Friday 22nd April is dedicated to young people in Schools from approx. 11am to 3pm, exact times and a full programme of screenings and events for that day will be issued closer to the event. 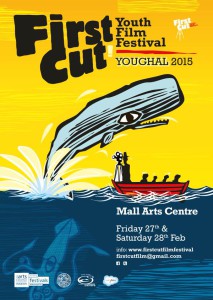 After another fantastic festival, and some tough decisions, here are the winners of the short film awards, presented in six categories this year, for First Cut! 2015.

Congratulations to everyone who was involved!

It was announced today that Brendan Canty, the filmmaker behind ‘Take Me To Church’, the internationally renowned Cork made music video that has been viewed 150 million times will officially open the 6th First Cut! Youth Film Festival. The special opening ceremony will take place on Saturday 28th February at 10.30 am in the ‘Pop-Up’ cinema at the Mall Arts Centre in Youghal.

Most screenings during the festival are accompanied by discussion and question-and-answer sessions with directors, producers or actors involved in the productions

One of the most important aspects of filmmaking is meeting other filmmakers to collaborate with and learn from.

Being a ‘pop-up festival it travels out again this year to the Mall Arts Centre, Youghal and turns it into a great ‘big screen cinema’ and festival venue with all sorts of exciting film events for young people who live there, in surrounding areas and further afield.

First Cut! Films want to engage young people who are making short films or who are interested but up to now haven’t had the opportunity to check it out & learn more. The whole community is invited to get involved, bringing together local, national and international talent, skills and vision.