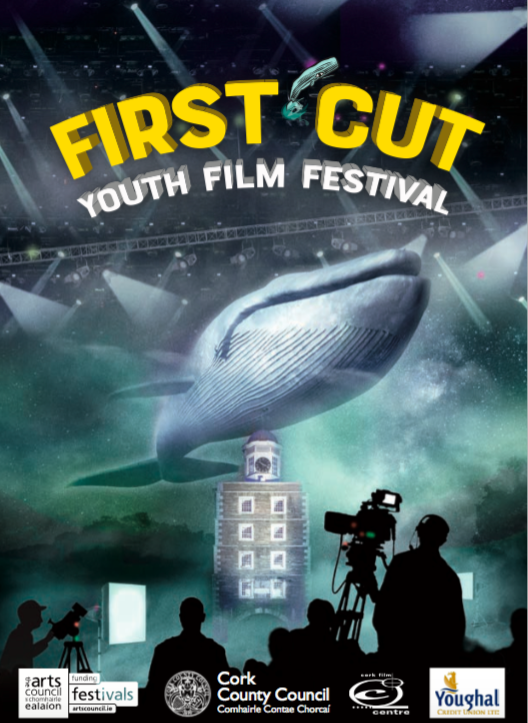 The First Cut! Youth Film Festival returns to Youghal in its ninth year. A vibrant international festival screening the works of young filmmakers aged 12-24, it is packed with an impressive line-up of screenings, workshops, and talks by film industry professionals. Not only does First Cut! offer a screening platform for young peoples’ films in a state of the art pop-up cinema, it provides valuable learning opportunities in an inspiring atmosphere where young filmmakers at all levels of experience can be seen and heard. The festival is a valuable opportunity for young filmmakers to network and share their passion for making films with a group of likeminded people in an enjoyable and supportive environment.

The Festival kicks off with Animania! A Day at the Movies for primary schools on Wednesday. A Day at the Movies showcases animations by 200 pupils from six national schools made in hands-on workshops with Paper Panther Productions, as well as other animated shorts. The day includes The Exciting World of Stop Motion with Belinda Walsh & a screening of We’re Going on a Bear Hunt by creators of The Snowman and the Snow Dog. The Animania! Programme is sponsored by Cork County Council & Youghal Credit Union.

2018 sees a record number of schools entries, so this year the Secondary Schools Film Days on Thursday 26th and Friday 27th features double the time devoted to secondary schools last year in recognition of the sheer quality and amount of filmmaking taking place in schools throughout Ireland. Cork Film Centre has long played a major role in bringing filmmaking to schools throughout Cork City and County. Thursday afternoon and Friday showcase the remarkable reach and energy of their workshop programmes, where many future filmmakers get their first taste of being behind the camera.

A Family Film Evening will take place Thursday at 6.30pm with a screening of Cartoon Saloon’s Oscar nominated classic, The Secret of Kells. Families will also have an opportunity to see the animations made in Youghal’s Bun Scoil Mhuire, South Abbey National school, Gaelscoil Choráin, Pobalscoil na Trionoide and Kyle National School, Clonpriest National School in Gortroe, and Inch National School in Killeagh through the Animania! workshops.

An Acting for Film Workshop with award winning actor, director, and playwright John McCarthy is open to anyone aged with an interest in acting for the camera. No experience is necessary, but booking is required: firstcutfilm@gmail.com.  This takes place on Wednesday at 3.30pm, and costs €10.

For the third year the festival continues the Youth Music Video Competition (YMVC) and its very successful partnership with Feel Good Lost’s Brendan Canty, best known for his phenomenally successful video for Hozier’s Take Me To Church, which was voted Video of the Year by the Irish Times and nominated for two MTV VMA awards. The YMVC mentoring programme gives talented emerging filmmakers a unique platform to develop their skills through a process reflective of the professional world. Six outstanding young directors were selected by director Canty and producer David Lester Mooney for the opportunity to make a music video under their mentorship: Alexander Kuribayashi, Eleanor Rogers, Greg Murphy, Michael Marren, Sam McGrath,and Seán Sheridan. Each finalist has been matched with a track from up and coming Irish act: Le Galaxie, Paddy Hanna, Ryan Vail, Bitch Falcon, Tim Chadwick and Pale Rivers. Organisers are delighted to premiere these videos at this special festival event where the award for best YMVC film will be announced.

Last year successfully drew crowds to Youghal for screenings and workshops and organisers envisage a further increase in participation this year! The festival team would like acknowledge the support of both the Arts Council and the local Cork County Council, and welcome on board the local business community whose support is invaluable in bringing this festival to Youghal each year.

The full programme of events for First Cut! Festival is available HERE.

For more information on festival events please check out www.firstcutfilmfestival.com.